On January 23rd, 2019 the City passed Ordinance 1193 which authorized an election for two propositions. Proposition 1 is for street projects, and Proposition 2 is for public safety projects. This page will provide a brief explanation of both projects and the wording of the propositions on the ballot. The election will take place on April 2nd, 2019, and will be decided by the citizens of Warr Acres.

The information below is a brief explanation of the projects that must be completed if the bond election passes. State Statues require that funds raised from these bonds must be used to complete these projects, and if funds are left over, similar projects. The pictures included are concept drawings. When the bond election passes the process will begin to create actual building plans and details which keeps the city from incurring costs until after the bond processes.

At the bottom of this page there are links to the actual text that will be on the ballot as well as some documents that are made available to the public related to this process.  If you have any questions you may contact City Hall at 405-789-2892.

Proposition No 1 will provide $4,490,000 for much needed street improvements in Warr Acres.  The funds will be allocated to street projects based on need, and divided between the four wards.  Included in this amount will be $2,266,000 which will be used to widen MacArthur Boulevard from NW 34th Street to NW 47th Street adding a middle designated left-turn lane.  Sidewalks and antique street lights will be added to this section similar to those installed in the 50th to 63rd project. These sidewalks are commonly used by Warr Acres residents providing them safe passage without walking in the roadway. The selected projects are estimated to cost between $530.000 and $565,000 per ward. If any funds are left over they will be used to complete other  prioritized street projects. The chart on the right shows the primary projects in green, and the secondary projects in yellow. Click on the map to view larger. 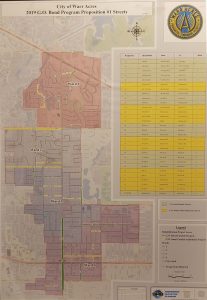 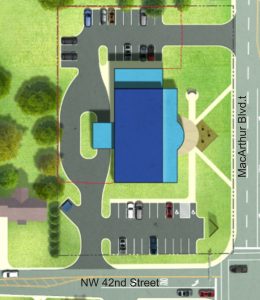 Proposition No 2  will provide $7,510,000 for much needed public safety buildings. An estimated $3,424,600 is to be used for a new police department. The building will occupy space the City already owns at NW 42nd and MacArthur. The new facility will increase the space from the current building size which was built for 15 officers in the 80's.  An estimated 14,000 square foot structure will provide appropriate room for the current 25 officers. The new facility will also move the police department out of the current residential area thus reducing the risk of responding to high priority calls from within a residential area.

Proposition No 2  will also include $2,152,000 for a new fire station. The new structure will be constructed on the current City Hall complex property. The current structure was built to house 2 trucks, and the department currently has 4 trucks which contributes to better ISO ratings and lower insurance rates for homeowners and businesses.  The current structure does not allow for adequate space to maneuver the larger trucks, and the overhead door frame had to be cut to allow the large ladder truck to fit in the station.  This station was added on to the existing structure, and the firefighters, trucks, equipment, and record keeping have outgrown the space. The new station concept will allow for the trucks to fit safely, reducing backing accidents, as well as improving the living conditions for the firefighters. There will be a notable improvement to the health and safety of the staff as well as visitors to the station.  Black mold has been found and remediated in numerous places in the station, but new areas appear every year. Firefighters suffer from respiratory problems and allergy symptoms on-duty, that then resolve off-duty. A decontamination station will be installed to remove the potentially dangerous bloodborne pathogens, feces, vomit, bedbugs, and harmful carcinogens that firefighter's face on scene. Additionally, appropriate washers and dryers will allow firefighters to clean soiled linens (uniforms and bedding), separate from the bunker gear extractor. The position of the station will be adjusted to provide for safe entry and exit for the larger trucks, and allow them to respond to calls by exiting onto NW 49th Street toward Hammond which reduces the distance of response within a residential area. 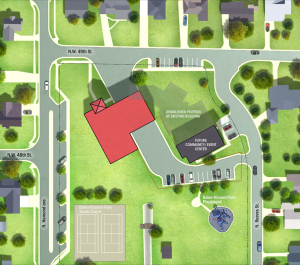 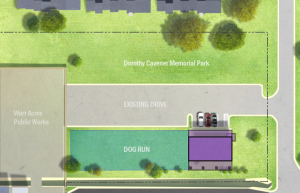 Proposition No 2 will also include $431,500 in funds to build a new animal welfare facility. The current animal control facility is tucked into a corner of the current public works facility.  It does not allow for public access for citizens to recover their lost pet or to select a new pet for adoption.  The new facility will be located on city property at NW 52nd and Hammond.  It will have inside and outside pens as well as an outside run for the dogs to get exercise. The new location will permit citizens to visit the shelter easily, and a safe facility to house more types of animals until they can be returned to their families, adopted or transferred to rescue groups.

The current City Hall structure is the oldest portion of the current City complex having been built in 1962.  It has been added on to accommodate the growth, but is no longer appropriate for the efficient operations that take place there.  The Council Chamber is not large enough to accommodate citizens who wish to be present during the meetings, and small offices have been re-purposed to house necessary technology infrastructure.  The structure is also used for municipal court functions with no publicly accessible restrooms. The only public restroom in the entire complex is a single restroom in the police department lobby.

With the passage of Proposition 1 funds that had been allocated to fund the MacArthur widening project can be used to relocate City Hall to the current Community Center building at NW 42nd and Ann Arbor.  This facility is larger, and will provide ample space for the functions that City Hall provides to continue a smooth operation of the city. An addition will be constructed on the north side providing a larger Council Chamber with ample space for visitors, and public restrooms. 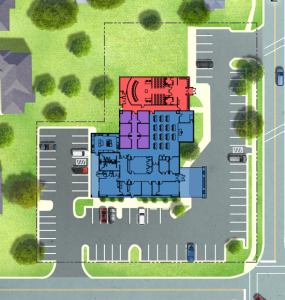